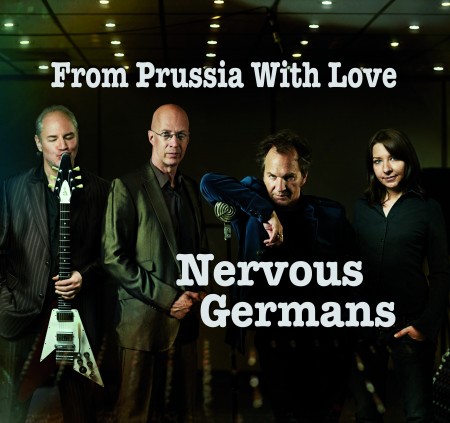 Nervous Germans – From Prussia with Love

The 1980’s new wave rock band has arisen to make a comeback in 2015 and they are the Nervous Germans.

From Prussia with Love is not as sappy, lovey dovey as it may sound. Sure, the head bobbing ballads and backing vocals can lead you to believe so, but a closer listen assures that this album offers the best of both worlds: the one inside of your own head, and the real one you get ready to take on. Filled with feel good and self-reflective tracks, the Nervous Germans never lose sight of their 80s roots.
Including tracks like “Liberation Day,” the album gets lyrically insightful to a beat that gets you looking out the window on a Sunday morning wondering what your purpose in life is. Queen-like backing vocals trigger the voices inside your head, and the rise of a strong guitar build up the intensity on this inspiring track.

With the undeniable presence of stiff drumbeats and light use of some background synths, many tracks feel like they came straight out of a John Hughes film. Others, like “Happy Birthday Major Tom” combine futuristic sounds and staccato guitar riffs to give out a funky ’80s mix. Is it old or is it new? It’s definitely a cross between ’80s pop rock and early 2000s punk rock. This 11-track album is pretty balanced throughout. Ending with “Paradise Lost,” the band begins the track with an orchestral journey, then brings in clear, single string sounds to finish off the album smoothly.