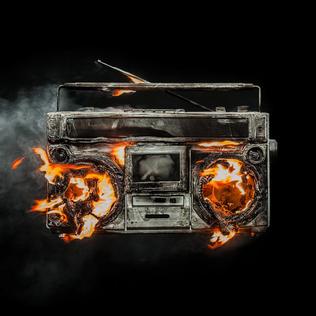 Devotees and casual listeners alike will find that in Green Day’s latest release, Revolution Radio, it is not just another mediocre follow up to the immensely successful American Idiot (2004). Instead, this new release is about the revival of a band who has since encountered a number of challenges. Three years ago after the lackluster release of ¡Uno!, ¡Dos!, ¡Tré! (2012), the band took a break which soon lead to the rehabilitation of front man Billie Joe Armstrong for substance abuse. After his recovery, the initial recording for this album began at Armstrong’s home recording studio. Although it was purely for enjoyment, at first, the quality of music and ideas were enough to lead to the seamless regrouping of the band. The end result of all this was an album filled with a high strung youthful energy. It is still remains to be respectable body of work that reminds us all of why we fell in love with the band in the first place.

After nearly three decades, Green Day has served as the voice of generations that were too afraid to speak up. One of their singles off the album, “Bang, Bang” does exactly what “American Idiot” was able to do for the early millenniums. Although the political and social agendas have changed entirely, the lyrics of “Bang Bang” address key movements such as Black Lives Matter and also the massive shootings that have struck our media headlines more frequently. More importantly, it’s abrasive but can be charming at times with the guitar melody. It rings of a certain familiarity in sound but what draws the most attention is the inclusion of lyrics like “Daddy’s little psycho and Mommy’s little soldier.” Yet, the most reflective track off the album is “Somewhere Now” which may possibly be an insight to the Armstrong’s time in rehabilitation. It still, however, provides the heated commentary regarding social issues which Green Day is best known for.

As meaningful as their social commentary is and very greatly appreciated, about a third of the way from the album it begins feel a bit too expected. Generally, the pace of the album is always fast and at times it feels like there should be some space to get away from the overuse of raw instrumentation. Part of the success of American Idiot (2014) came from tracks like “Wake Me Up When September Ends” and “Boulevard of Broken Dreams”, so why can’t there be more moments of subtlety on this album? Yet, with tracks like “Troubled Times” and “Outlaws” that are a bit more calming, in contrast to most of the album, there is a wonderful exquisiteness to the overall end product.

This can perhaps be considered the first album they have had in a long time that has no big conceptual story tied to it. However, it is clear that Green Day has taken a step forward to reconnecting with the basis of what creates meaningful music with strong messages worth sharing.

Songs to Listen to: “Bang Bang”, “Outlaws”, “Bouncing Off the Wall”, “Say Goodbye”