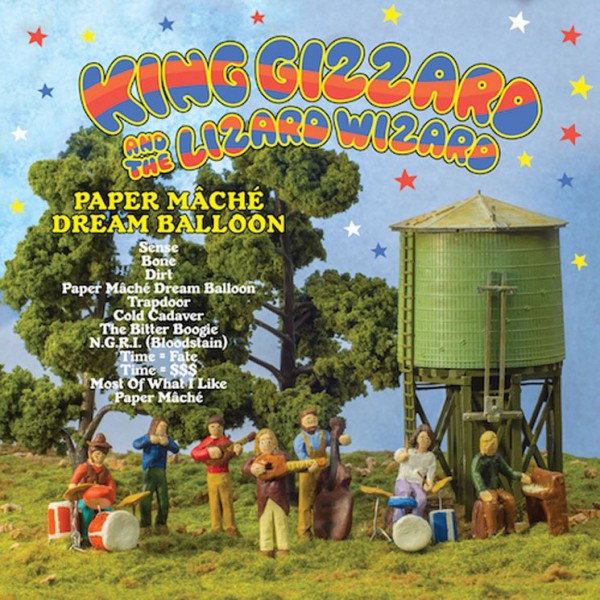 Since their formation in 2010, King Gizzard and the Lizard Wizard have kept themselves busy. In addition to starting their own label, Flightless, their recent album Paper Maché Dream Balloon is their seventh full-length studio release, and their second long play release of 2015. If seven albums in five years isn’t already enough to impress you, consider also that each album is pretty stellar in its own way.

The Australian rockers have been compared with heady psychedelic bands in the past. Paper Mache Dream Balloon, however, marks a point of departure from their previous trippy jam albums. Songs like “Bone” and “Dirt” still have the deep, rolling drum beats and mellow vocals familiar to King Gizzard albums, but they also play up the flute element more noticeably than before (as does the rest of the album, really). The first half of Paper Mache strikes a resemblance to folk-revival DIY bands like Woods every bit as much as the sprawling jams of Float On-Fill Your Lungs and I’m In Your Mind Fuzz earlier resembled some Tame Impala work.

While the album is largely charming and warm, King Gizzard has a willingness to get goofy, too. “Trapdoor,” for example, sounds like something that would be on the soundtrack if Pink Flamingos were to be released today. Between a vocal repetition of “trapdoor” in the style of the B-52s, and the sputtering flute and drums, the song is equal-parts whimsical and edgy. Even goofier, though, is the end of the final song. The band concludes the album in a beepy twitch explosion that cannot easily be described with words.

Never a band to be pinned down, stylistically, King Gizzard switches from the folksy vibes to an unusual psych-blues tone around halfway through the album with “The Bitter Boogie.” With the combination of warbling harmonica riffs and lo-fi lead vocals, the song almost sounds like it was thought up in a shack near a bayou on a muggy day. But the band ramps things back up to 10 with “N.G.R.I. (Bloodstain),” as they throw quick beats and chirpy piano chords at us in a way that could be called giddy.

After a few listens, my main issue with this album is that it is so short. While I prefer the more plugged-in jams from their earlier albums, King Gizzard has tapped into something really enjoyable with Paper Mache. The album certainly has a retro-feel, but the band successfully avoids sounding like they’re milking the success of their influences. The album feels vaguely familiar, yet entirely its own entity at the same time. It is comfortable, without growing stale. Whether utilized for easy-listening or a more contemplative study, it’s tough to imagine this album seriously offending anyone’s sensibilities.