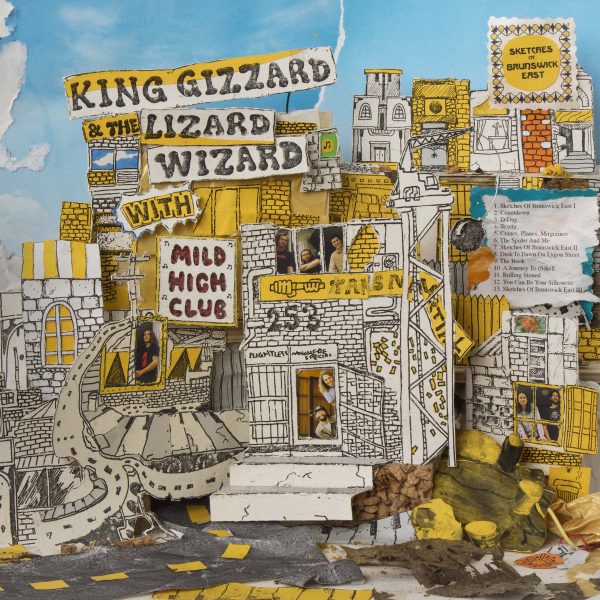 In the past year, King Gizzard has been one of the most stimulating names in rock music. The group has been a tumble weed in the rock genre, adding on genres and influences with each album. The Aussie seven-piece now comes through with their third out of five potential albums for 2017. This time, the boys have paired up with Alex Britton of Mild High Club. On the collaboration, front man and lead song writer Stu Mackenzie said “I think we hit it off because our approaches are very different…yet similar, Alex has studied music, whereas my approach is to fling shit at the wall and see what sticks. I can’t read music at all. But we’re like the two ends of a horseshoe coming to meet in the middle.”

Typically, when King Gizzard goes to record an album, they enter the studio with an experiment or idea. In the past, we have seen an all acoustic album, an endless looping album, microtonal tuning, and spoken word. Here on Sketches of Brunswick East (an allusion to Miles Davis’s Sketches of Spain), the group plays with jazz and Ethiopian influences. Although it is very much less of a concept or experiment than the past four records, it certainly fits in with their history as they deliver a new sound again on LP number three of 2017.

The album sounds very loose and spacey, probably a product of Britton’s knack for psych-pop. For the most part, the album is a collection of one-two punches of instrumental jazz rock fusion that develops and leads into the next track, a more traditional rock song with vocals.

The instrumentals are deeply layered with a variety of different instruments to attain lavish sounding jams. These tracks can range from eerie to blissful, but all achieve psychedelic sounds that are pleasant to hear. Unlike older jazz, the tracks here are more compact.  I would have liked to see a few of them develop and play out like on “Cranes, Plains, and Migraines,” but I understand with more simpler riffs and beats that serve as an intro or outro. “A Journey to (S)hell” is definitely the stand out instrumental for me. Even with it being just over two minutes long, it achieves an awesome, funky, and haunting groove.

The songs with vocals on here are for the most part great. They still have all the same elements as instrumental tracks, but sound more pleasing to our modern ears when vocals play a main role. Many of them are fun and easy-going, but the less breezy ones are the real deal. “Tezeta” and “The Book” are two of the best songs the band has ever released.

As per usual with King Gizzard, the lyrics are taken at face value here. They are not very poetic, but set a good theme and story to play along with the instrumentals. It is mostly to match the tone of the music. The vocals serve as another instrument, heavy with effects.