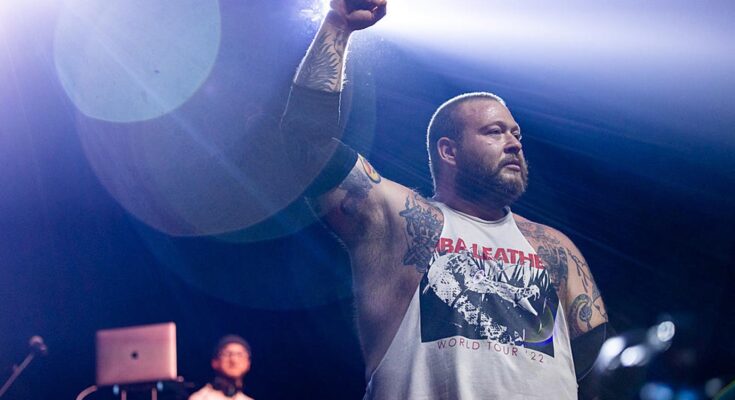 On a snowy night in Chicago, three rappers came together to perform at the Riviera Theatre. The NBA Leather Tour included Boldy James, Earl Sweatshirt, and Action Bronson, along with the producer The Alchemist. These rappers all come from very different backgrounds and levels of success, with their biggest commonality is extensively working with The Alchemist, all of them having multiple songs or even multiple albums with him. Regardless, I was still very excited to see all of them and had extensively listened to each previously.

The first act of the night was Boldy James, a rapper from the collective Griselda with a deep catalog. His set had The Alchemist at DJ, and almost all of his songs he performed came from his latest albums with The Alchemist. His set was the most variable of the three rappers, ranging from slow and controlled to fast and bouncy. The set went from “Turpentine”, a smooth, intricate track, to “Brickmile to Montana”, a loud and quick track. This transition was seamless; Boldy was on his A game with his flow and stage presence. Most in the crowd seemed to know the tracks and unlike other shows where the first few artists to perform don’t get much love, Boldy got a lot of energy from the crowd. That was a great aspect of the concert; the crowd was hyped, involved, and overall added a lot to the concert experience. The performances wouldn’t have been so great without the amazing crowd.

The second act of the night, Action Bronson, immediately got the crowd on its feet. His stage presence and liveliness became evident from the first track and carried throughout the set. Bronson was even a little crazy at points, mimicking the horse sounds in his songs or constantly reaching out to the crowd on one knee. His set moved from his latest album to some tracks with The Alchemist, and finally to some of his more popular, older tracks. This included songs like “Golden Eye”, “Mt. Etna”, and “Actin Crazy”. Bronson’s performing was on point and kept the crowd on their toes for the entirety of his performance.

The last act of the night, Earl Sweatshirt, was a slow and somber end to the night. He acted like a foil to Action Bronson’s performance; still giving a great performance but not as much liveliness. This didn’t take away from his set, that’s just how he is. His set featured the most tracks of the night and what felt like the longest performance as much like Bronson he performed songs from his newest album, from Some Rap Songs, tracks with The Alchemist, and even songs from his older albums. 24 songs were performed, with more than half of Some Rap Songs and his new album Sick!. Outside of those albums, he also performed “E. Coli”, “MTOMB”, “EAST”, and “Grief”, along with even more tracks. This rollercoaster of a set was easily managed by Earl as often he’d jump from track to track with little crowd engagement in between. One of the only times he stopped after the track was to ask why people were moshing to “EAST”.

The NBA Leather tour had a stacked lineup coming in, and that lineup definitely delivered. All three artists with their large and varied discographies managed to play their new tracks and old favorites. The show did start late, but that didn’t take much away from the fantastic performances.