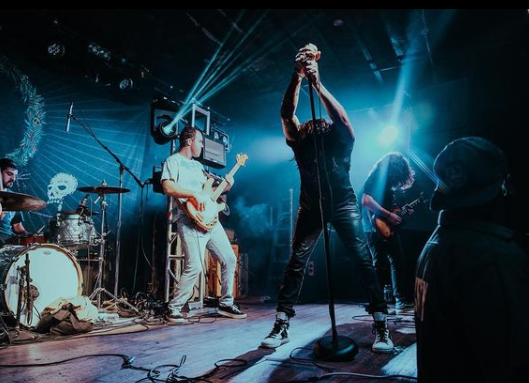 My first concert experience in over a year was this summer at Lollapalooza, which was a great experience in and of itself. But I was ready to get back to the more intimate, in door, late night concerts that many people had come accustomed to pre-pandemic. The New Age Filth tour, with Hail the Sun headlining, was the perfect opportunity a few weeks ago. The concert was at Bottom Lounge, a great concert venue situated in a fairly small and dark back room of a lively restaurant. It was in sharp contrast to the Lollapalooza experience, which was outside, crowded, and took place mostly during the day. The venue and the much smaller crowds allowed for a more emotional and much more intimate concert experience that many hadn’t experienced in a long while.

Hail the Sun had three smaller acts performing before them, ranging in a wide variety of tone and music. The first, Body Thief, was a relatively unknown rock band hailing from Washington D.C. They were the most akin to Hail the Sun’s music, featuring intense performances across the board, from the vocals to the guitars and the drums. Although they didn’t get the crowd going as much as the other acts (people were still filing in at the time), and they were much lesser known, they still had a great and memorable performance. The second act, Kaonashi, brought a lot more out of the crowd, including some more rowdy fans. This all made sense as soon as they began their set, immediately launching into some intense metal. The standout was singer Peter Rono, absolutely destroying his voice and headbanging when he wasn’t. A common theme of the night was how energetic and exciting these bands were; it was clear they wanted to be there and were having fun. If I didn’t know there were two acts to follow, I would’ve thought they were the headliner.

The penultimate performance of the night was by Kurt Travis, joined by Eternity Forever/Golden Necklace bandmates Brandon Ewing on bass and Ben Rosett on drums. Both Eternity Forever and Golden Necklace have the same band members, but they decided to change their name after not creating new music for a few years. Kurt’s been in a variety of bands over the last decade or so, ranging from math rock in Eternity Forever and Golden Necklace, post hardcore in Dance Gavin Dance, and even indie pop in his own solo work. He performed a wide variety of songs, most of them coming from his old/new band Golden Necklace, and even performing an unreleased track currently named “Tootsie Roll”. Kurt’s vocals and Brandon’s bass playing were effortless, allowing the crowd to relax and vibe with the music as a breather before a more chaotic Hail the Sun set. In fact, their lead single from their new band called “Vibe with Me”, was one of my favorite songs they performed; the catchy and engaging lyrics were a perfect match for the energetic bass. His most popular song, “Desperate”, was also fantastic; I was happy enough with the original song but they went into a breakdown section at the end for about two minutes that was even better. I hadn’t listened to much of Kurt’s work with the various bands he’s been a part of, but after seeing him perform, I’m very excited for Golden Necklace’s upcoming tracks.

Finally, the main attraction, Hail the Sun, was up. They let no time go to waste as they went straight into their set with the explosive “Domino” from their new album New Age Filth. It’s not their craziest song by any means, but it was a great opener as they got into their wilder tracks. “Slander”, also from New Age Filth, was where the set really picked up and the crowd started became more involved. The crowd was even more chaotic than much bigger ones I’d seen at Lollapalooza a few months prior, as some people were very aggressive in the pit at the center of the crowd and some were even crowd-surfed to the front. It didn’t help that lead singer Donovan Melero was encouraging this behavior, constantly swinging his microphone around like a yo-yo and pointing to those crowd-surfing. Donovan was the main vocalist for the night but he also played the drums during a few songs in the middle of the set. This didn’t stop his vocal performance from being aggressive and loud like it was the rest of the set. The only times it wasn’t was during the slower songs, “Relax/Divide” and “Risk/Reward”, both great diversions from the hectic set. His voice shined through in these moments and probably gave the other band members a much needed break.

Along with performing from their new album New Age Filth, they performed tracks from throughout their discography, one even dating back to their 2012 Elephantitis EP. Being a newer fan, I wasn’t as accustomed to some of the tracks from the lesser known albums, but “The ‘Fun’ in Dysfunction” and “Ow! (Splidao!) [I Like It, Though]” were both tracks I will be listening a lot more to. The second track in particular was a stand out as the tempo constantly changed and kept the crowd on its toes.

The band ended on “Parasitic Cleanse”, a great closer for how balanced yet hard hitting the song is, and quickly exited in the dark. Not even a minute after, the chants from the crowd wanting an encore began and a few minutes later the band was back, performing the final song from their newest album, “Punch Drunk”, and my personal favorite track from the band, “Human Target Practice”. I’d been anticipating the song the entire set and was wondering when they were going to play it, so I was very glad it was the very last song. Although intricate and dynamic, the song is catchy and exciting, giving us one last performance to mosh to.

Getting back to in person, live performances has allowed me to rediscover how important live music really is. Listening to recorded, mixed, and mastered performances is great and all, but the rawness of live performances is something that’ll never be replicated in your AirPods. I think rock, especially post-hardcore, shines live, with complex song structure, incredible vocals, and energetic performances. Hail the Sun, and the acts before their main performance, proved this.