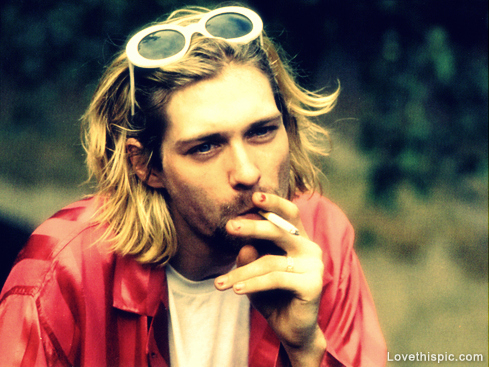 On April 8, 1994 an electrician found Kurt Cobain lying dead in the guesthouse behind the singer’s home in Seattle with a shotgun resting on his chest and a suicide note. An autopsy revealed that the estimated time of death was April 5 at 7:27 AM, and was officially ruled a suicide of a shotgun wound to the head. Cobain was 27 years old.

Lead singer, guitarist and songwriter of Nirvana, Cobain was a result of heavy punk influence in style and attitude. After seeking through several different musical endeavors, Cobain was able to pair up with bassist Kris Novelsic to form Nirvana. The name came from the buddhist concept that Cobain described as “freedom from pain, suffering, and the external world,” aligning with his punk-rock ideology.

Nirvana gained mainstream momentum after releasing Nevermind in 1991, setting the ultimate platform for the grunge scene. Besides the widely-known single, “Smells Like Teen Spirit”, the album also consisted of three other key tracks; “Come As You Are”, “Lithium”, and “In Bloom”. The album was certified diamond by the Recording Industry Association of America (RIAA), and made the lists of greatest albums of all time by Rolling Stone and Time.

Cobain had a history of problematic drug tendencies and health issues. He had previously attempted suicide by drug overdose, which led to issues between he and his wife, Courtney Love. After his death, the group released Unplugged in New York, which debuted number one on the Billboard 200 and won the grammy for Best Alternative Music Album in 1996.

How Has Music Changed Over the Past Decade?