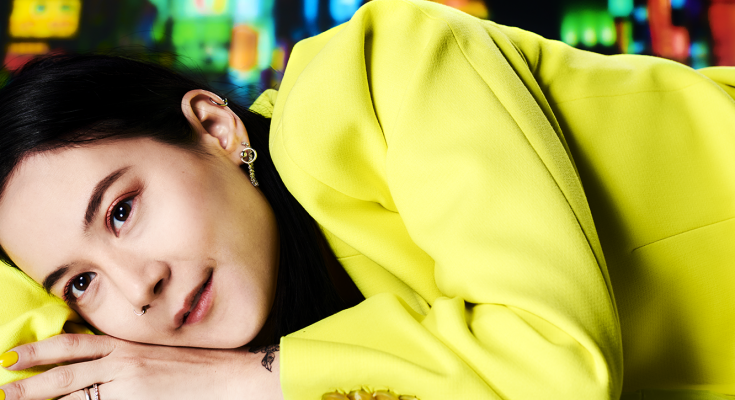 “The Music Makes It” is a series of articles that focuses on the use of music to elevate different forms of media. This article will highlight the recent work of Michelle Zauner, bandleader of indie group Japanese Breakfast.

Crying in H-Mart is a searing look at Zauner’s life. In the memoir, Zauner reflects on her experience as a Korean-American child growing up in Eugene, Oregon, a predominately white city. Zauner traces her navigation of identity through visits to her grandmother’s apartment in Seoul to trips to H-Mart, the Korean-American supermarket chain, to her college and music experiences on the east coast of the United States. The focal point of Crying in H-Mart is Zauner’s relationship with her mother who was diagnosed with terminal cancer when Zauner was only 25. Throughout the memoir, Zauner uncovers the complexities of her relationship with her mother, finding comfort and love in the Korean recipes that bonded the two together for so many years. Zauner’s memoir is funny. It is heart-breaking. It is a must-read.

If you aren’t much of a reader, you are in luck. Crying in H-Mart is set to be adapted into a film with the soundtrack penned by Michelle Zauner’s Japanese Breakfast.

In June 2021, Zauner released her third album, Jubilee, a triumphant collection of songs that perfectly frames the earlier release of Crying in H-Mart. The first track on Jubilee, “Paprika”, is a joyous march. In the song, Zauner asks, “How’s it feel to be at the center of magic?” My answer – the center of magic feels like listening to “Paprika” at maximum volume while shouting the lyrics in my living room. A summer track through and through, “Paprika” evokes thoughts of fragrant food cooking on the stove, sunlight gracing your face, and curtains dancing around open windows.

If the release of her wildly successful memoir and album wasn’t enough for you to invest in Michelle Zauner’s art, maybe her score for the upcoming, highly anticipated video game, Sable, can convince you. On August 27th, Zauner released “Glider”, a dreamy single for the open world video game. Zauner’s music is the perfect complement to Sable’s unique, ethereal art style. Watch the summer trailer for Sable featuring music by Zauner here.

Sable will release on September 23rd, and the full score will be available the next day. You can buy Crying at H-Mart at your local independent bookstore and listen to Jubilee on all streaming platforms now. Welcome to the jbrekkie universe!