Dawes has a devoted fan base; one that follows them everywhere. The act out of LA performed at The Other Tent Friday night, and did it all again, on a smaller scale at the Sonic Stage Saturday afternoon. Expecting the audience to be small, Dawes planned on playing a mellow set for passerbys, but we’re pleasantly surprised to see the small Sonic Stage lawn was filled with ‘Rooers. Lead singer, Taylor Goldsmith, was taken aback by the scene, “We didn’t expect you guys to be here!” Dawes mellow folk rock sound provided a much needed reprive from the bounce music and off the wall entertainment of Day 2. The majority of their brief 30 minute set was comprised of songs from their most recent album Nothing is Wrong, including “If I Wanted Someone,” “Million Dollar Bill,” and their encore song “How Far We’ve Come.” The crowd crooned Dawes’ melodies throughout the set, keeping the energy high. It was a great quick set from an act that’s going places.

“Bonna-fucking-roo! It’s good to be back!” – Dougy Mandagu, lead vocalist, The Temper Trap.

Bonnaroo veterans, The Temper Trap, performed to a good size crowd at What Stage Saturday afternoon that just kept growing as their set went on. Perhaps it was Dougy Mandagu’s sweet swooning vocals that pulled them in. It was a good performance that showcased much of the bands latest self titled album which was released in May. One of their newer singles, “Trembling Hands” was a big hit with the crowd. Knowing not everyone would recognize their new stuff they made sure to throw some oldies into the mix, including “Fader” and “Sweet Disposition.” “Sweet Dispoisition” was the final song of the set and provided a strong close to The Temper Trap’s performance.

Punch Brothers is a bluegrass group that certainly likes to mix things up. They push the genre to it’s limits, making each and every song more interesting then the last. Though their instrumentation is classic bluegrass, featuring a mandolin, fiddle violin, banjo, guitar, and string bass, their sound is more intense, a bit more edgy then your basic banjo twang. The performance included instrument solos, jam session moments, instrument “battles” and lots of great tunes. There was “Flippen” a fast paced Swedish instrumental, the seemingly happy “Heart In A Cage,” and, my favorite song of the set, a bluegrass cover of Beck’s “Sexx Laws.” Punch Brothers showed me the light! Bluegrass and music of every type can get along. If every song ever had a bluegrass cover, the world would be a better place.

It’s crazy to think that just last year around this time I was experiencing my first Bonnaroo. And, yes, I was that punk who asked, “What is a Childish Gambino?” Well that thing is Donald Glover, part-time actor (Community [NBC]), full-time freestyle rapper who goes hard, takes names, and doesn’t give two efs about how you percieve him. His beats? Hypnotic. His rhymes? Unforgetable. It’s easy to become a fan of Childish Gambino. Thousands turned out yesterday to see him perform and he exceeded expectations. He performed songs old and new. There was “Do Ya Like” and “I’m On It,” from Culdesac his EP release from a few years back. And of course there was “Freaks and Geeks,” a song that gets everybody on their feet and shows off Gambino’s flow and his ability to command a crowd. The set focused primarily around songs off his latest release, Camp. There was a moving rendition of “Firefly” and “Heartbeat,” along with “Bonfire” and “You See Me,” two hard hitting tracks that left the crowd screaming for more. Then there were the technical difficulties. The keyboard wasn’t working, so Gambino simply went on and decided to free-style instead and he tore it apart. Towards the end of the performance, Gambino, comfortable with the Bonnaroo crowd, decided to show off some new material. Childish Gambino has come such a long way in one years time, it’s exciting to this of where he will be in another year from now. 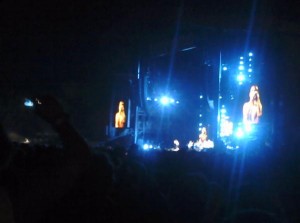 Bonnaroo headliner, Red Hot Chili Peppers (RHCP) took all those in attendance on a journey with a stellar breathtaking performance complete with a stunning light show that complimented each tune. It was truly an unforgetable sight. RHCP jumped right into “Monarchy of Roses,” as the lights from the stage flickered in between shades of gold and yellow. The screens to either side of the stage showed every smile, signal, and movement on stage. The images, which were tinted in a simple black and white, were just edgy in that RHCP way. The setlist had a nice variety of old and new. They grabbed everyone’s attention by starting off with “Monarchy of Roses” then continuing on into “Dani California.” Then it was “Scar Tissue,” who was dedicated “to all their friends at Bonnaroo and beyond!” After “Look Around,” Flea praised Radiohead on their performance the night before. It’s easy to tell when you’re listening to a RHCP set, all you have to do is listen for the guitar line to kick in. It’s amazing how much time it takes to decipher what song is being played. Take “Californication” for instance, it was only a few seconds before the crowd cheered in excitement. During their encore performance, the RHCP rocked out on the instruments, you know just blowing people’s minds, then went straight into “Suck My Kiss.” It was simply a mind blowing performance. Can’t wait to see what they do at Lollapalooza!

Alice Cooper is a rock star; a legend. And one of the must see performers on my list at Bonnaroo 2012. His over the top, somewhat creepy, theatrical show was something I had to see with my own eyes. Greeting the crowd with a long distorted monologue, Cooper was hidden from the audience, shielded by a curtain that quickly fell as the first song, “Black Widow” started up. High atop a tower stood Cooper, dressed in a spider get up complete with eight legs. After a sick guitar solo from one of the guitarists on stage, Cooper made his way down the stairs of the structure, greeting the crowd with all eight legs open. And thus began the show. The stage looked like something that had been raised by the pits of hell. The drums sat in a large skeletal structure and a dummy hung from some pipes. It was eerie, in an awesome sort if way. The set was raw and angsty, something to be expected of a Cooper show. Even Cooper himself was looking agile and fresh faced; or certainly younger than his 64 years. I’m thinking make-up, black eyeliner, and an array of costumes had a part to play in his youthful look. There were so many during the show that I had lost count, though my two favorites have to have been Mad Scientist Cooper for “Be My Frankenstein” and Ring Master Cooper who came out in a jeweled outfit and top hat for, “School’s Out.” It was not just a set, but a true performance complete with costumes, props, acting and some amazing music. My hat is off to you, Mr. Cooper.