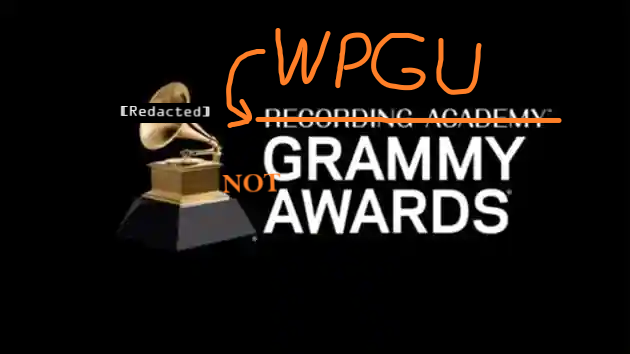 With each year more polarizing than the last, the Grammys has lain a reputation with questionable decisions. Crescendoing with this year’s low viewership and frequent mishandlings, we at WPGU saw the opportunity to fill that professional award show void. Thus was the birth of WPGU’s Grammys Not Grammys. 8 categories total this list with nominees selected by our fantastic web department. A panel of judges assembled by web staff volunteers then painstakingly deliberated each list until a winner was chosen. Please enjoy our following award ceremony:

What happens when you combine a thumping guitar line, stream-of-consciousness lyrics about the stresses of life, and a killer horn section fit for a great jazz song: you get the song of the year. Phoebe Bridgers’ breakout hit “Kyoto” is equal parts danceable and heart-wrenching and is unlike anything the indie star has put out before. Shifting away from her usual folk and acoustic based sound, “Kyoto” finds her exploring a beautiful landscape of sound that she presents effortlessly. In a year marked by frustration, anger, and sadness, no other lyric better sums up the collective thoughts of society like her scream-singing “I’m gonna kill you” and it is this deep connection she creates with the audience that makes “Kyoto” the best song of the year.

Rina Sawayama as an artist tries to capture everything she has to say in as many ways as she can say it. To date in the last five years, she can be found modeling, profiled in Vogue for collaborative work with visual artist John Yuyi about Asian beauty standards, standing firmly with and as part of the LGBT+ movement and against conversion therapy legislature, in two episodes of an Idris Elba fronted comedy show, support touring for Charli XCX, self-producing her first extended play Rina, and finally putting out her debut album, Sawayama, this year. In short, Sawayama is an artist with a lot to express and will find any and as many different ways to express it as she can, and her music finds itself in the cross of current influence. Elements of rising hyperpop trends, operatic vocal influence, and catchy pop hooks are orchestrated across her album and show a musical artist who has always been at the ready to make art in whatever form it may take. This confidence and thrust behind her music are together exciting and fun.

25 minutes may seem like a long time for a music video, but it is so worth it when it is as entertaining as UNLOCKED is. Similar to the classic Scooby-Doo and the Cyber Chase, this music video is a work of art. Denzel Curry and Kenny Beats lost their file for the album and are transported into the computer, spending the entire time looking for it. Each song has a different animation style with the guys taking down various enemies on their hunt for the files, which is like Cyber Chase where the gang makes their way through different levels, facing villains along the way, to stop the Phantom Virus. Even one of their songs, “Lay_Up.m4a,” is Scooby-Doo inspired. Their sandbending in “Pyro (leak 2019)” is nowhere near the mastery that Toph Beifong from Avatar: The Last Airbender possesses, but Denzel and Kenny get points for effort. Each scene keeps you amused as one is different from the next in terms of the style of art and references to pop culture; nevertheless, passion runs through all of them. The banter between the two artists allows them to let out their frustrations and functions as transitions between the songs. This music video is incredibly well-done and enjoyable to all, regardless of music taste.

Chloe x Halle’s Ungodly Hour was one of the most celebrated albums of 2020, and it’s easy to see why. In this performance, the Bailey sisters show off their refined vocals, charisma, and sensitivity. Backed by a band composed of all women, the duo perform five songs beginning their hit “Don’t Make It Harder on Me.” The sisters swap lead and harmonies throughout the concert, and years of practice and innate sisterly chemistry make their singing look effortless. The performance also feels intimate, and Chloe shares with the audience that “Baby Girl” was written for moments when you feel like you’re not good enough and are in need of reassurance. “This year 2020 has been absolutely bonkers for all of us,” she adds. The sisters make their performance feel right at home, singing in comfy clothes while sitting on a desk surrounded by curtains, plants, crystals, and tea. This performance is both stunning and comforting, and you can watch it in full below.

Alt is a fairly loose label. Acting more as a status symbol rather than a style of music by itself, many many albums can fall under this label. The contenders this year were of genres worlds apart, featuring their own unique sound palette and theming. While all of these albums are excellent in their own right, no album but Grae by Moses Sumney truly captured the feeling of the modern age. It seems as time goes on, genres continue to unravel, coalesce, and blossom into alien soundscapes with familiar roots. Grae‘s DNA shares features with avant-garde, electronic, folk, chamber pop, and R&B. This strange mix highlights the themes of isolation perfectly. The experience is cold, but not chilling. There’s a strange comfort taken in this uncanny landscape. Sumney’s vocals modulate effortlessly and brightly, acting as a torch guiding the listener through this bizarre landscape. These elements do more than create an alternative album, they create an alternative experience. If you want to travel but have no place to go, listen to Grae. Take your time to enjoy the sounds and implicit sights of a far-off landscape, wholly its own.

When it comes to Freddie Gibbs, one would be hard-pressed to find someone with a more impressive track record of terrific collaborative albums. The Gary, Indiana native has teamed up with legendary producer Madlib to craft the critically acclaimed Piñata (2014) and Bandana (2019), and in 2020 he paired up with The Alchemist for his second time to make Alfredo, undeniably a top-three Freddie project to date. Bursting at the seams with unique production from Alc and bitingly cold flows and rhyme schemes from Freddie, the project also posits a compelling narrative as it provides a layered deep dive into how Gibbs copes with his crime-ridden past as someone who has since found colossal wealth as a musician. Combine these cogent properties with top-notch features from renowned names like Tyler, the Creator, Rick Ross, Benny the Butcher, and Conway the Machine, and you’ve got the best rap album of 2020.

Winner: KiCk i by Arca

Electronic music leaves an open door for experimental music, and the electronic album of the year should do exactly that. “KiCk i” by Arca is completely unique and has the power to influence the world of electronic and hyper pop music in the near future. The album is able to tell a story beginning with a fierce and lyric-heavy rap opening (Nonbinary), to influences of Electro Pop, Hip-Hop, Latin and Reggaeton vibes, and close with a heart wrenching ballad (No Queda Nada). Every sound and song is different and encompasses the versatility and talent of Arca. The routes are electronic with a wide range of influences and experimentation. This was an album that truly felt like it was art from the artist and in defiance of what may have been easy or crowd-pleasing.

The OST for Soul features tracks by Jon Batiste (jazz musician, musical director for The Late Show with Stephen Colbert), Trent Reznor and Atticus Ross (of Nine Inch Nails), Daveed Diggs (of Hamilton, clipping.), and Cody Chestnutt (of The Crosswalk). Soul features the story of Joe Gardner, a music teacher who lives in New York and aspires to be a famous jazz pianist. After a near-death accident, a journey through the realms, a friendship with stubborn 22, and a return to earth, Joe discovers that passion does not equate to purpose and that there is beauty in existing every day as a person in this world. As a film about a music, one would expect the soundtrack to be stellar, and the work of Batiste, Reznor, Ross, Diggs, and Chestnutt does not disappoint. The soundtrack especially shines through Ross and Reznor’s gripping score and Batiste’s intricate jazz arrangements. Together, the score and jazz arrangements perfectly support the beautiful animation and storyline of Soul.

While the OST for Soul is this year’s WPGU Not Grammys winner, you can check out tracks from each of the great nominees below.

“Bigger than Us” by Jon Batiste

“Hear Me Talking to You – Instrumental”

“My Life is Out There”

“The Proposal (Under the Horse Chestnut Tree)”

Birds of Prey: And the Fantabulous Emancipation of One Harley Quinn

“Harley Quinn (Danger Danger) From Birds of Prey: And the Fantabulous Emancipation of One Harley Quinn”