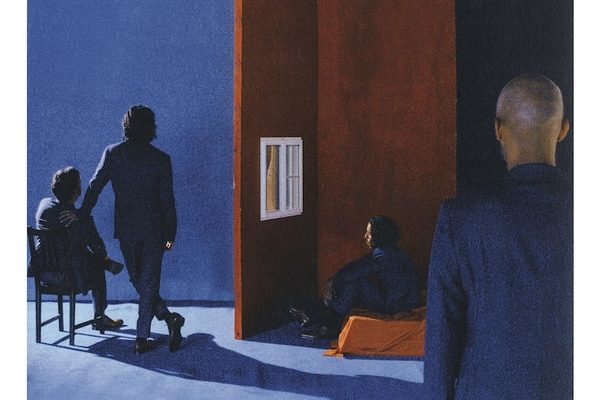 Showing that they remain unique and multifaceted still to this day, veteran L.A. indie band Chicano Batman is back on the scene with their fourth full-length studio album, Invisible People. Chicano Batman has been making waves in the realm of indie music now for a decade and have shown strong dedication to their craft by perfecting their sound over the course of each album. The band’s debut album in 2010 saw them emerge as an oddball indie collective that championed a groovy alternative sound that was accompanied by lyrics almost entirely written in Spanish. Their following 2014 album, Cycles of Existential Dread, saw the band embrace a more fully realized psychedelic and funky sound, the album riddled with whammy guitar effects reminiscent to the stylings of Jimmy Hendrix. Nonetheless, Chicano Batman still maintained their roots through the groovy endeavor by keeping a fundamentally alternative style and crafting more catchy Spanish tunes.

On their third album, Freedom is Free, Chicano Batman maintained their trajectory of maturity by further refining their psychedelic-alternative sound, blending in hints of folk, and fine-tuning their songwriting. The warmly toned 2017 album helped to grasp the attention of the indie mainstream, resulting in the group touring with the likes of Vampire Weekend last summer. Three years later, Chicano Batman has decided to wander completely astray from the path of the familiar. Invisible People takes on a new sound, strictly English lyrics, and a completely different tone from the rest of their discography—but it does not disappoint.

The new album sees the band transition towards a more electric-funk oriented alternative style, filled with distorted synths, groove inducing basslines, punchy electric guitar riffs and plenty of reverb-heavy vocals. “Color my life” commences the album, led by quirky keys and palm-muted guitar strumming to kick off the project on an off-kilter vibe. The opening track is followed the first jam of the album, “Blank Slate.” A sure highlight within the tracklist, the song carries an earworm of a chorus that’s driven forward by a rapidly strummed guitar and audacious synth effects, resulting in an eccentric bop with loads of replay value. Other standout tracks include the catchy, slow-burning tunes “I know it” and “Pink Elephant,” both of which make great use of falsetto vocals and minimalistic electric guitar riffs while telling endearing stories about a love interest.

Chicano Batman fully embraces their psychedelic side on songs like the head-bopping “Polymetronomic Harmony,” which has heavily dubbed over vocals and a punchy drum-synth combo, and “Moment of Joy,” where the band’s echoey vocals combine with eerily swelling synths to concoct the sluggish and ethereal sound that the track so gracefully embodies. The lighthearted “Bella” gifts the listener with another catchy harmonic chorus, a funky bassline and a charming pan flute that is sure to have anyone with even the minimal inclination towards dancing a reason to do just that.

While the primary highlight of the album is the incredible instrumentation from the L.A. based group, there are some intriguing narrative moments on Invisible People as well. The prime example of this is “Manuel’s Story,” in which the song narrator’s uncle tells a tale of how he had to flee his country because his older brother had lifted “some heavy contraband” and the drug cartel targeted him when they couldn’t find his brother. The exhilarating tale is told alongside an equally exhilarating and groovy instrumental that champions a jamming guitar and a plethora of different synth effects, ranging from gritty to melodic. Combining the energetic instrumental with vivid descriptions of high-speed chases littered with gunfire, this track is sure to get the blood pumping.

Being as long-tenured and well-established of an indie band as they are, no one expected Chicano Batman to suddenly deviate from their proven formula to produce quality music under the sound that made their fans fall in love with them, but here we are. In going against the grain—successfully, too—they have reminded us why they are one of the most talented and exciting bands on the indie music scene. Should you have any interest in the indie genre whatsoever, you would be completely remiss to not give Invisible People the listen it deserves.