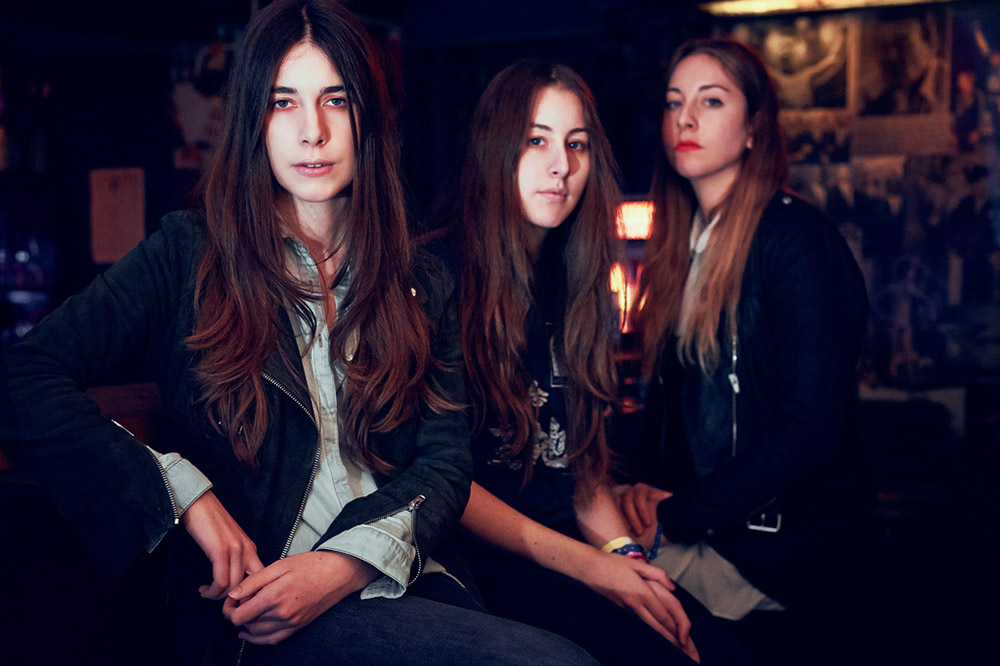 When I came abroad to study in London, I figured the opportunities to see bands live would  perhaps be greater than it was back home in Champaign-Urbana, but so far the live music I’ve gotten to take in here has been insane.  A week ago, today, I was granted an opportunity to interview LA-based rockers (and sisters) HAIM, as well as take in one of their shows.  Though my previous knowledge of the band was rather sparse, I can say with the utmost certainty that popular music, as a whole, is better because HAIM exists.

I stepped off of my train at 3pm and was greeted with typical North England weather: cold, dreary, and depressing.  As I made my way to the venue where I had an interview in 3 hours, I noticed something strange: fans lined the block. For a concert in Nottingham, England, five hours before show time in the nasty drizzle.  My mouth legitimately dropped.  At this point I realized I may have underestimated the scope of HAIM’s appeal.  Though none of the three sisters would ever tell you this, to quote Ron Burgundy, they’re ‘kind of a big deal’.

HAIM’s performance was more than what I expected out of them.  Their freshman album Days Are Gone was a smash hit, and included singles like “Falling” and “The Wire”.  This has thus thrust HAIM into the mainstream consciousness, but their live act shows no hints of complacency, pushing the envelope seemingly with each track.

Over 15 minutes of talking to Este (Bass, Vocals) and Alana (Keyboards, Vocals) I came to realization that HAIM is still, like many young musicians, growing into their fame.  Where they differ from others, however, is that they’re growing with spectacular tact and eloquence.  They’re neither arrogant nor frantic, which is rather refreshing coming from any artist who is accustomed to the limelight.  Check out the interview and some videos below!

Disclaimer: due to technical difficulties, the first few questions were not recorded on audio, but can be found in print below.

Boswell (WPGU) – How has tour been?

Este (HAIM) – Tour’s been great. We’ve been all over Europe, and I think we only have like 10 days left. It’s actually kind of sad.

Alana (HAIM)-But in 3 weeks we start again, so that’ll be fun. And then there’s festival season which is basically like a vacation

Boswell – What’s your favorite festival? Bonnaroo is the quintessential American festival I feel like but I have a soft spot for Lollaplaooza.

Este – Bonnaroo’s definitely crazy. You never know what you’re going to see around there. Honestly, though, I think Lolla was one of my personal favorite festivals we got to play. At Bonnaroo we were rushed to get to another festival and didn’t get to stay for that long, but at Lolla we got to stay for all 3 days and really soak in the experience, and we liked it a lot.

Alana – Yeah, Lolla was super cool. (to Este) Hadn’t you been to Lolla a lot before that?

Este – Yeah, When I was like 18 my boyfriend’s dad had some type of connection where we could get free tickets every year. It was a really sweet deal. It’s really crazy the lengths that people will go to if they really want to hear music. I mean I’ve snuck into the Hollywood Bowl plenty of times. There are some woods up on the side and you can just sneak right in or sit in the woods. I actually did that to see James Brown like 6 months before he died. It was awesome.

Boswell – Late 2012 and 2013 has been kind of a whirlwind time for you guys, wasn’t it? I mean in its first week your debut album even beat out Justin Timberlake here in the UK. Did you enter 2013 having any idea how huge it was going to be?

Este – It’s been crazy. We’ve just been on the road touring constantly so the transition was pretty gradual.

Alana – This is our second time in a lot of these European venues and it’s amazing to see how big the crowds have gotten. We’re playing to crowds I never could have imagined in places I couldn’t have imagined, and it feels like it’s the total culmination of our two-year journey. Before we start new music, of course.

Boswell – You guys are all sisters, right? And you’ve been playing together for quite some time. How do you stay sane all the time?

Este – Do you have Siblings?

Alana – In a nutshell, ok like we’re sisters or whatever, but people can’t get over that fact. It’s weird.

Este – I think that people assume that because you’re related and you have to spend so much time together that eventually you do kind of not want to be around your siblings. That’s never really been a thing for us. I think it’s a testament to the way our parents raised us, really.

Alana – Yeah, we still laugh our asses off. I think laughter is the fuckin’ key, honestly. It’s the key to having a happy tour.

Este – That and not taking yourself too seriously and being able to laugh at yourself and have fun on tour. Because honestly, at the end of the day, if you take yourself tour seriously, tour can get stale real quick.

Alana – Plus this is best job in fuckin’ world, so why would you spend it sad? I’d rather do this way more than sit at a fucking deck from 9-5. There’s no use in taking shit too seriously.

Boswell – At what point do you think you guys realized “holy shit…we’re famous, now?!?” Or was it a gradual transition?

Este & Alana – We haven’t had that moment!

Alana – I think it’s just that there’s so much more we want to do that I don’t even think I’ll ever believe that we’re famous. We’ve done so much with this record, but there’s so much more I want to achieve. We’ve scratched the surface of what I actually want to do with the band. I don’t think there’s ever going to be that moment because that’s when you start relaxing and we’re definitely not relaxed. So I guess that moment hasn’t happened yet.

Este – I think that’s also kind of a recipe for disaster once people start to think of themselves like that.

Alana – Kid Cudi was really cool. Cudi and A$AP (Rocky) were both really dope. They just happened so fucking randomly. Maybe I’m just not that educated in the rap game, but I just assumed that when you’re in the studio you just do something, but we’re not used to that at all. With Cudi, he hit us up and was like ‘you guys should just come to the studio sometime’.

Este – Yeah, he said he sampled a song he wanted to work on with us and so he just sent us a song and we thought it was cool, but then he said ‘what I really want to listen to is this:’ and he pulled out this Hit-Boy track. And we were like ‘fuck yeah! we love Hit-Boy!’ We’re huge Hit-Boy fans. So we just started writing over it and the song was written in like a couple hours. Then we tracked it and we thought we were going to go back into the studio and re-track it. Then a couple of months later he was like ‘Nah, I love it. I’m putting it out’. It was dope.

Boswell – Wow, that was quick. He’s been playing really small shows all over London lately.

Alana – I know! And we’re missing him by minutes. Literally.

Boswell – How was playing SNL?

Alana – Mind-blowing. That was one moment where I was like ‘woah…’. I never thought we’d be able to play SNL

Este – It was my dream. It’s always been my dream.

Alana – And the fact that we were in a skit was crazy. They don’t tell you that you’re in a skit until hours before, and we went through the whole week thinking ‘oh shit we’re not going to be in a skit’ because we wanted to so much.

Este – I made it abundantly apparent, though. I grew up loving sketch comedy. It was always a weird dream of mine to be in a sketch so I made it probably annoyingly apparent that I wanted to be in one. I have a couple friends on the show from LA and I think they kind of did me a solid and said ‘we need to put Este in a sketch’. But yeah, it was a crazy experience.

Alana – It’s so scary to be on the show. There’s so much weight on performing! You spend all week stressing about it and then when the actual show happens, it happens so fast. Then you’re like: ‘Wait! We spent so much time together!’

Boswell – What’s next for Haim?

Alana – We’ve got a US tour. We’re finally going to the US, which never happens.

Este – We’re actually playing in Chicago at the Riveria.