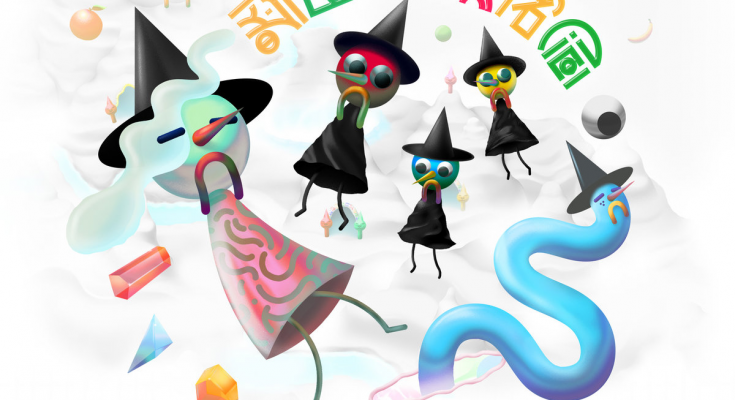 When one thinks of worldbuilding, they may first imagine the works of novelists and script writers, characters such as Daenerys Targaryen or Finn the Human. These are the products of a mainstream culture which heavily caters to producing fantasies via visual mediums but neglects the wonderful works of musical worldbuilding. It is a niche concept, telling a story in a world unfamiliar to us over the course of an album or EP, but there are hidden gems among the lesser known glimpses into sonorific alien planets. At a particular intersection between whimsical worldbuilding and the UK garage scene, an artist unlike any other brings a unique voice and soundfont to the forefront of experimentalism.

The entirety of Seamus Malliagh’s discography is dedicated to documenting the tales and adventures of little celestial beings who visit him in his London studio. His stage name is Iglooghost, a title borrowed from a stage of evolution these god-like figures go through over time. Much of his stories concern these funny little ice-cream-cone angels and their trials and tribulations. His first EP, Chinese Nü Yr, tells the story of a witch, the stage before a being has evolved into an iglooghost, which has instead mutated into a giant flying worm. This EP thoroughly logs the journey the worm makes in vibrant bubblegum instrumentals. Iglooghost takes a particular sound and style and truly utilizes it to its fullest– there are no words but there is a coherent and wonderful story being told in synesthetic rhetoric.

Two years after Chinese Nü Yr, Iglooghost released Neō Wax Bloom in 2017, a personal favorite of mine and an overall stellar forty-minute adventure. When I first came across this record, I had no knowledge of the artist’s tendency for centering his music around a magical world of little creatures, but with the album art combined with music, there was no need to be filled in– the adventure was there, it was poignant, fun, and mesmerizing. Writing this article made me relapse into this album not once but three times; a whole two hours spent revisiting the wonderful planet of Mamu in a single day. It is evident from here that this artist has both raw talent and the desire to simply tell a story the way he knows how. Every track is unique and colorful while using shiny, wonky synths and unquantized rhythms. His composition lends greatly to the adventurous nature of the record, as very little is looped or repeated from measure to measure and every track consistently moves on from idea to idea. The only thing which repeats throughout the album are small human voices which chant distantly again and again, speaking in what could either be a language only Malliagh knows or one immediately foreign to westerners. Just like in Birth of a New World by 2814, the producer comes from the western world yet drawing significant influence from East Asia. In an interview with PopMatters, Malliagh states that he had wide range of influences before and during production which included Balinese music, 1980s Japanese ambient, and J-pop. The cover itself features gibberish writing which resembles some kind of Chinese or Japanese calligraphy to the average monolingual English speaker.

If I should recommend any work from Iglooghost, out of the rich discography he has released from twin concept EPs Clear Tamei and Steal Mogu to his melodious single Eœ which dropped less than a week ago on November 25th, I would have to recommend any reader begins with Neō Wax Bloom. He revealed in an interview with London in Stereo that he had gone through “semi-mental breakdowns” and went on to say in later interviews that he had seriously stretched himself past his limit. Malliagh seemed to have the feeling that he came out of the album in an unhealthy mental state as a result of the strain he put on himself, and for this reason, I urge anyone reading to start from the brain-melting, ADHD adventure that tortured the artist into confronting his own limitations.