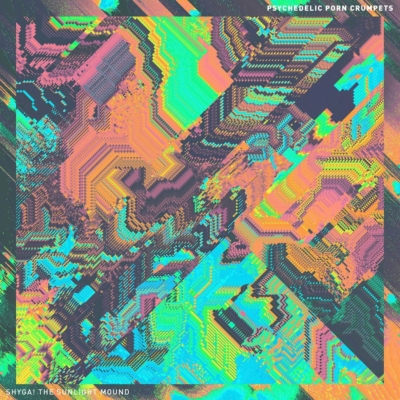 The jarringly enchanting guitar work by guitarist Jack McEwan that is seen throughout
High Visceral is flipped around, and this time takes notes out of the King Gizzard playbook and
blends them with PPC’s unique wall of sound. In songs like Mundungus and Mango Terrarium,
the Gizzardisms on guitar and vocals are clear as day. Jack McEwans use of modal scales here
is a fascinating shift from the band’s earlier reliance on pentatonic or minor pentatonic scales.

Even Hats off to the Green Bins, the rhythm and the vocals mix to a sound that you would swear
was King Gizzard. And when Hats off to the Green Bins transitions seamlessly to Glitterbug, I
couldn’t help but think about the structure of Nonagon Infinity (an album that loops infinitely).
For as much as the band draws off of King Gizzard in this album, the Psychedelic Porn
Crumpets still very much retain their own sound. The thing that stands out to me most when
listening to PPC is how the music hits you like a tidal wave and pulls you under into another
world. While listening to High Visceral Pt. 1 and 2 was like a sedated hallucinogenic drift down a
log ride, SHYGA! The Sunlight Mound is akin to going on a bender and riding the Goliath at Six
Flags. In an interview with Atwood Magazine about the album, Jack McEwan said about the
band, “it’s like feelings or no feelings. We’re like the most serious-non-serious band I think is a
good way of putting it.” The band certainly has applied this philosophy in this album but it is still
incredible.

The band’s shift between where they started in 2016 and where they are in 2020 are two
different sounds that complement each other amazingly. SHYGA! The Sunlight Mound is a
masterpiece of an album that continues to build on the innovation that has been going on in the
psychedelic rock revival that has happened in recent years. The album is so dynamic, and
although King Gizzard was referenced heavily in this article, there are sounds from all around
the psychedelic rock scene throughout this album but it still stands out as a uniquely PPC.