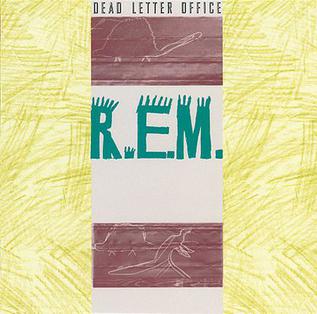 What kind of college radio station would we be if we did not talk about our founding fathers? The best way to honor R.E.M. is to review their monster that is Dead Letter Office. It is “badly written songs, drunken jokes, and occasionally, a worthwhile song that doesn’t fit the feel of an album” according to guitarist and multi-instrumentalist Peter Buck’s liner notes. Essentially, it is a collection of b-sides, covers, and oddities that did not make it to their I.R.S. records, and since they did not have a return address, they got stuck at the dead letter office. Released almost thirty-four years ago (April 27, 1987), this junk mail has withstood the test of time.

You notice the packages section. Who would mess up the address on something important like a package? How have these not been auctioned off yet? It looks loaded. We have some Velvet Underground covers, maybe one too many, but still. There is also a cover of fellow Athenians’ song and one of Roger Miller’s songs. Over there in the back corner is…“Toys in the Attic” by Aerosmith? Looks like that one did not have enough stamps. They even give a nod to Pere Ubu’s “Lonesome Cowboy Dave” on their own “Walter’s Theme.” Anytime I think of Oklahoma, which is not often, but when I do, I hear Michael Stipe’s voice.

These covers are surely something else. By far, their best one is Pylon’s “Crazy.” It is an outtake from Fables of the Reconstruction, but Buck claims he heard Pylon’s song the day Chronic Town was released and thought it was a lot better than their stuff. “Walter’s Theme” and “King of the Road” fit together because they are fun drunken messes. The band had spent the day drinking and tried to write a song for a barbecue joint’s commercial. Then, it turned into them sloppily improvising a classic country song.

Some real treats are the instrumental ones (nothing against Stipe’s singing except most definitely in “Femme Fatale”). “White Tornado” is a perfect surf-rock song. It was written the same afternoon as “Radio Free Europe” according to the liners. You may have heard of the masterpiece that is “Rotary Eleven,” but “Rotary Ten” paved the way for that one. Both have that lounge music feel. Interestingly enough, the backing track of “Voice of Harold” is that of “Seven Chinese Brothers” from Reckoning. At least this letter was repurposed. In this version Stipe slides into a Southern drawl while reciting the liner notes of the Revelaires’ gospel album, The Joy of Knowing Jesus. The best songs are the ones where the lead singer is reading off other media (I’m looking at you, “Lovelines”).

It seems like we have some postcards with lengthy messages on the script side. These are the songs that are actually decent. Referring back to the liners for yet another time, Buck says that “Burning Down” was meant for Reckoning, but the band soon got tired of it. They took up “Ages of You” right after, which sounds similar to its predecessor because they took the pieces that they liked from “Burning Down” and switched up the rest. The band got sick of that one too, so neither of them ended up on the 1983 album. These “companion pieces” were remixed by Steve Fjelstad. Another song that is less of a joke is “Bandwagon.” It is a dig at fans jumping on the bandwagon, but how can you take offense when you hear Bill Berry’s playful drumming?

The album is not meant to be taken too seriously; Peter Buck admitted that. Because this is a compilation of songs that did not make their first albums, it feels disjointed. However, it has that frenetic energy that only bands in their youth can harness. It is one of my favorite albums because I forget about it, just like all those undeliverable letters stuck at a dead letter office, and when I rediscover it, I honestly cannot help but smile. If you are looking for a lighthearted album to dance alone in your room or to laugh at all of its absurdities, this is definitely for you.