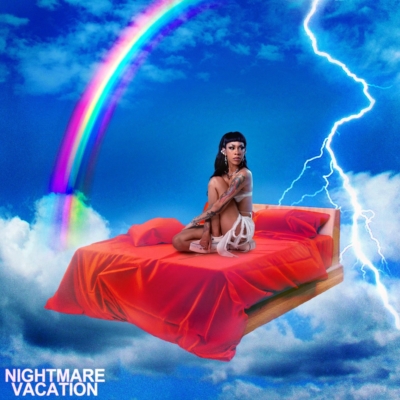 Rico Nasty isn’t your typical artist; she’s got a wide range of styles that allow her to fit
into any song. Her most popular song, “Smack a Bitch”, features her abrasive delivery with
harsh lyricism and a bass heavy beat. On Anger Management, her 2019 collaborative album
with producer Kenny Beats, has songs ranging from bouncy, braggadocious “Big Titties” and
humble, thoughtful “Sell Out”. “Time Flies”, which appeared in the video game Madden NFL 20,
has more of a melodic rap with soft synths and a simple trap beat. Just in the past two years,
Rico has shown she is able to rap, sing, and fit the mood of any song she’s given. All of her
different styles come together in her latest release, Nightmare Vacation.

Rico doesn’t let up from the start of the album with the simple but hard-hitting song
“Candy”. She makes it clear that she won’t be changing any time soon, with lyrics like “On a
dark and stormy night, I don’t blend in, bitch, I shine bright” and “I won’t change the way I act
no matter where I go”. People can find many reasons to dislike her but none of them can bring her down because she simply doesn’t care. “Don’t Like Me” reiterates that and Rico couldn’t
make it any clearer. If that isn’t enough, Gucci Mane and Don Toliver feature on the track to
also say that they don’t care. Even from the first few songs, Rico stands her ground and tells us
that she won’t change, and she isn’t going anywhere.

Many of the more abrasive and off-putting songs on the album are Rico at her very best
with production from another rising artist, 100 gecs. They previously worked together on
“ringtone (Remix)” and on this album we get four songs with 100 gecs production: “Let It Out”,
“Pussy Poppin”, “iPhone”, and “OHFR?”. On an album with many standouts, these stand out
even more with obtuse production and questionable production choices that work (most of the
time). “Let It Out” has Rico screaming over heavy bass and a gritty synth which fits well with the
loud vocals. “iPhone” features the loud production that we’d expect from 100 gecs but with lots
of autotune and great vocals from Rico mixed in. “OHFR?” goes off the deep end with what can
only be described as clown horns and spring sound effects as part of the beat. I’m not a fan of
100 gecs songs, but even I was a fan of the collaborations they put together for this album.

Beyond the usual heavy hitting songs, we have come to expect from Rico, there are also
some great melodic songs. “Loser” has Rico and Trippie Redd singing over a simple guitar and
trap beat loop that works quite well. “Own It” continues the theme of Rico not caring about
what others have to say and owning herself with another simple pop banger. Aminé features on
“Back and Forth” which sounds much like a song he would put out but is a welcome addition to
the album. Throughout the album, Rico shifts from the loud and harsh vocals that made her
famous to more melodic rap. With any other artist I wouldn’t say it works, but with Rico, it
does.

Two other standouts are much more reminiscent of some of her older songs and both
were produced by Take a Daytrip of “Mo Bamba” and “Panini” fame. “STFU” is a classic, loud
banger much like her breakout song “Smack a Bitch” where Rico attacks the beat and lets it all
out. Her borderline screamo rap style never gets old and I’m glad that she still wants to make
songs like the ones that made her famous. “Girl Scouts” is a more eerie with its production and lyricism but still manages to bring the same energy of the previous song. Both songs serve as an
example of Rico playing to her strengths yet still moving forward with her sound.

Nightmare Vacation stays true to its name by being an enjoyable listen but at times
being scary and abrasive. Rico includes artists she’s worked with in the past, namely 100 gecs
and Aminé, that she should collaborate with a lot more in the future. Rico cements her status in
the rap game as a female artist to watch and a break from the calm and lack of creativity in a lot
of the popular rap music that we’ve seen this year. Nightmare Vacation is the vacation from
2020 that we all needed.