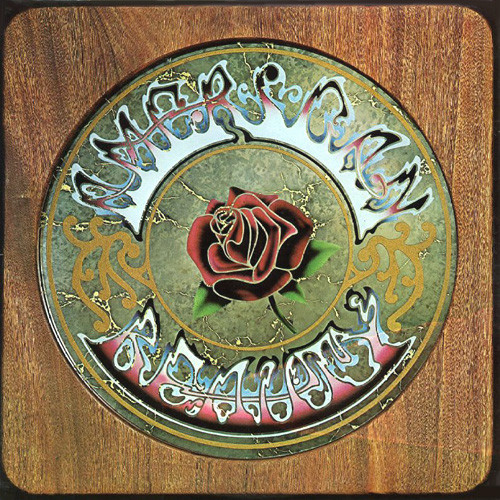 The WPGU music writers have a new weekly treat for all of you listeners and readers separate from our Remember Whensdays and Reviews. We introduce Throwback Thursdays. We’ll be reviewing an old album for you every week with our take and review on it today. By pure coincidence, American Beauty was released November 1st in 1970 – but its effects are everywhere. Especially at the dawn of this autumnal season, I couldn’t pass this tonally relevant album up now.

For years, the ignorant and uneducated version of myself avoided The Grateful Dead. Their name scared me, their fandom intimidated me – this was all without ever hearing their music. It wasn’t until I watched Freaks and Geeks for the first time (there’s an infamous scene where Lindsay really discovers The Grateful Dead, playing the record over and over again and dancing along) that I realized what I was missing out on.

And then I heard “Truckin'” off American Beauty. There is an intermingling today of rock, folk and country music that, in large part, is thanks to American Beauty and its predecessor, Workingman’s Dead. I don’t know what I was doing with my life before I listened to the masterpiece, but I can’t help but hear its influence seeping everywhere from Phish to Bruce Springsteen to John Mayer’s last two albums. Specific songs and entire albums wouldn’t have been dreamed of if it hadn’t been for the Dead’s masterpieces that year, and this record specifically.

The blend of purely American country and period-typical rock and roll are best summarized in “Till the Morning Comes” – the kind of song a corrupted version of the Brady Bunch kids cruise to on the weekends. While many of us might recognize the familiar lilting ditty of “Ripple,” or “Friend of the Devil,” or even more likely, the still fairly ubiquitous vocal melange in “Truckin,'” it’s songs such as “Box of Rain” and “Brokedown Palace” that resonate as particularly emotional and illustrative with thorough nature imagery and heartbreaking lines on lonliness and helplessness.

But yes, “Truckin'” exists – and thank god for that. There’s an unfairness pitted against singles or most popular songs, marking them as immediately incapable of being the best song a band produces. I won’t make any arguments that “Truckin'” is The Dead’s best, but as Andy Zwerling said in his contemporary review of American Beauty for Rolling Stone, The Dead “have given us all something to treasure with this album. It’s one for now, and one for the kids in 20 years too.” And when thinking about the college kids around half a century later, it’s “Truckin'” that’s particularly poignant. None of us can deny that everything at this point is a long, strange trip and we’re busted up and relieved to have had the adventure.