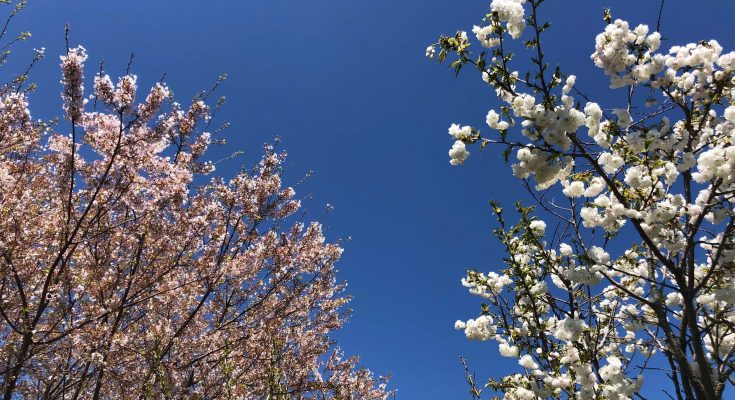 Due to their brevity, cherry blossoms often symbolize the impermanence and transience of life.
Like the season of spring itself, sakura also represent new beginnings and present the opportunity
for communities to gather under the beautiful pink and white blossoms.

The Japan House at the University of Illinois has a total of 50 cherry trees which were donated in
2008 by Dr. Genshitsu Sen, the 15th generation head of the Urasenke Tea School in Japan. There
are three varieties of cherry trees in the Sen Cherry Tree Allée at the Japan House: Yoshino
(Prunis x yedoensis), Sargent (Prunus sargentii), and weeping (Prunus subhirtella var. pendula).

Last Tuesday, I took a trip to the Japan House to see the full-bloomed cherry blossoms. When I
walked underneath the cherry trees, the wind gently moved the branches, causing the pink and
white petals to drift lightly down to the earth. Groups of friends walked and laughed together. An
artist painted the landscape. Students basked in the sunlight. It was truly a lovely scene, and I felt
a lot of emotions being in that space, especially as the academic year comes to a close and
COVID-19 vaccines continue to roll out in the United States.

Following my trip to the Japan House, I decided to create a playlist to commemorate my walk
under the cherry blossoms. Check out 12 great sakura-inspired tracks in the playlist below.

I would be remiss if I did not start this playlist with “Hikaru Nara” (光るなら), the first intro
theme for the 2014 anime series Your Lie in April or Shigatsu wa Kimi no Uso. The name of this
playlist is a direct reference to the title card of Your Lie in April which reads, “I met the girl
under the full-bloomed cherry blossoms, and my fate has begun to change.” The series follows
the stories of piano prodigy Kousei Arima and violinist Kaori Miyazono, two high school
students who meet underneath the full-bloomed cherry blossoms. Your Lie in April is a must
watch for anyone who likes romance, stellar musical arrangements, and gorgeous animation. Full disclosure, you might want to grab some tissues for this one (cherry blossoms are a prominent
symbol in the series after all).

Michelle Zauner, the bandleader of Japanese Breakfast, was born in Seoul, Korea and grew up in
Eugene, Oregon. In spring 2014, Zauner learned that a cancerous tumor was spreading in her
mother’s stomach. In autumn 2014, Zauner’s mother passed away, just two weeks after Zauner
married her partner, Peter Bradley.

In 2018, Zauner wrote “Crying in H-Mart” for The New Yorker, an article that explored Zauner’s
grief and identity through her time shopping in the Korean American grocery store chain. On
April 20, 2021, Zauner is releasing a memoir of the same name, Crying in H-Mart. Additionally,
her third album Jubilee will release in June 2021. “Be Sweet”, one of the singles released ahead
of Jubilee, is the second track on this playlist because it is a musical celebration which maintains
Zauner’s trademark interiority. Like the full-bloomed cherry blossoms, Zauner reminds us that
life is short, but there is always beauty and joy, even in moments of grief.

“Never Knew Love Like This Before” by Stephanie Mills (1980)

I first heard “Never Knew Love Like This Before” on the hit FX television series Pose. The track
is the name of the fourth episode of the second season and plays during a pivotal scene. For the
sake of not spoiling one of the most impactful moments in the show, all that I will say is that like
Zauner’s music, like the cherry blossoms, Stephanie Mills’ “Never Knew Love Like This
Before” is a celebration of life and, at the same time, a fond farewell.

The third and final season of Pose premieres on May 2, 2021.

It’s a bit on-the-nose, I know, but the cherry blossoms bloomed in April, and this is a song called
“April”. In all seriousness though, Beach Bunny’s upbeat jam somehow feels happy and sad at
the same time, an emotion reminiscent of the symbolic nature of the cherry blossoms.

And come on, the pastel roller blades on the album cover scream, “It’s spring, and I’m blading
under some cherry trees”.

“Hurt”, the fifth track on my sakura-inspired playlist, is from Arlo Parks’ spectacular debut
album, Collapsed in Sunbeams (2021). In the chorus of “Hurt”, Parks sings:

These lyrics encapsulate one of the emotions that I felt while I was on my walk at the Japan
House. After a long winter of dealing with a sense of isolation stemming from the pandemic, it
felt great to be outside, around people, and away from my computer screen.

“Nandemonaiya” is the final track on the amazing original soundtrack for the 2016 anime film
Your Name or Kimi no Na wa. The film disrupts the idea that time moves in a linear fashion and
investigates the interconnection of fate and love. While much of the film takes place during
autumn or winter, the last scenes of Your Name are set in spring, as the cherry blossoms bloom. I
won’t spoil the emotional and poignant ending, but its seasonal setting is no accident.

And that’s that on new beginnings.

You know when something feels right even if you can’t exactly put it into words? That’s how it
felt when I decided to put “Good Days” by SZA on this playlist. Maybe it’s the nature sounds in
the introduction of the track. Maybe it’s SZA’s ability to occupy so many emotional spaces in
one song. Either way, “Good Days” is the essence of the cherry blossoms.

Admittedly, I first chose “Pink + White” for this playlist because cherry blossoms are varying shades of pink and white. After re-reading the lyrics, however, I realized that “Pink + White” has a much deeper connection to sakura than I first realized. Frank Ocean’s lyrics in “Pink + White”
are nostalgic and perfectly capture the impermanence of life. At the same time, Ocean investigates the notion of immortality:

Remember how it was

Say what up to Matthew, to Shoob

Say what up to Danny

Say what up to life immortality

Bending up my Nikes

Running out the melpomene, nicotine

This is life, life immortality”

I feel like y’all can probably figure this one out. Absolutely great tune though.

Like the previous Beach Bunny selection, The Lumineers’ track “April” makes this playlist
because of its tie to the month that the cherry blossoms bloomed at the Japan House. The piano
arrangement is short and sweet, just like the fleeting nature of the full-bloomed cherry blossoms.

The first 2 minutes and 53 seconds of this dreamy ballad makes it feel like you are taking a walk
on a beautiful spring day. When the tune changes for the last minute, it feels like you have
stopped your stroll and decided to lay down under a cherry tree – eyes closed, headphones in, no
thoughts in your mind.

We’ve reached the end of the playlist, and I don’t have much more to say. I’ll leave you with the
words of the ethereal Elliott Smith.

“Haven’t laughed this hard in a long time

I better stop now before I start crying

Go off to sleep in the sunshine