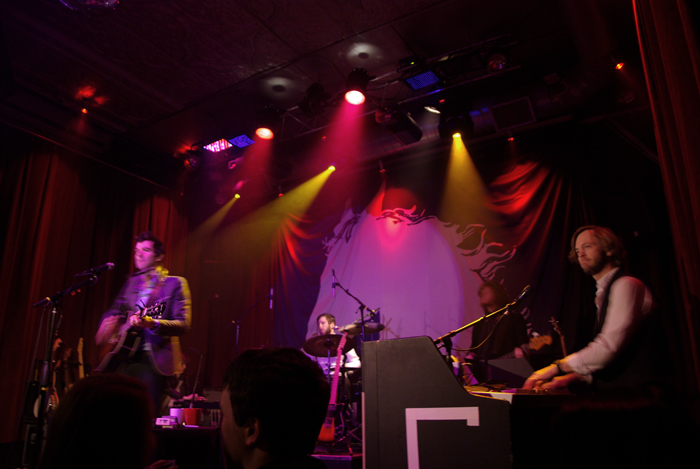 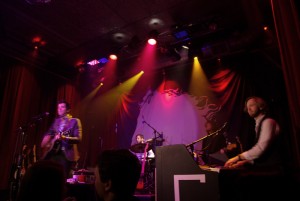 The intimate sets of both openers, Katrina followed by Chris Koza, were illuminated by their powerhouse vocals. Katrina is a tiny girl with a gigantic voice, if you want to check out her tune “Shame On Me” you can catch it on Sirius Radio. Chris Koza was just as talented and also played an acoustic set, accompanied on the piano.

The openers set the stage for a very surprisingly enjoyable set by Stephen Kellogg and the Sixers. Front-man Stephen Kellogg had his acoustic guitar and harmonica around his neck, very Bob Dylan-esq. All the boys were full of life and very excited to be playing Valentine’s Day, Stephen was not shy to say that being away from his wife made the day’s events less of a let down. Between their tunes that had the crowd clapping and singing along there was lots of banter with the audience. You couldn’t drown out the large crowd when they were all singing “you bring the cup, and I’ll bring the moonshine”. Everyone was lovin’ the predominately long-haired but all very fresh faced group, and between the guys changing instruments and chatting with the crowd it was a very sweet performance.

Find out more about Stephen Kellogg and the Sixers here.

(Music Director) Nat. Wonton. Soup. Needles. Needley. Natcat. Natalie. Just don't call me Shirley. I've worked at WPGU 107.1 since the start of my undergrad career here at the University of Illinois and it's been da bomb. You can hear my beautiful (ahem) voice on the WPGU airwaves and check out my handiwork as web producer on our website. When I'm not around Illini Media you can find me dancing around town or drinking coffee somewhere.

View all posts by Natalie Wontorczyk →